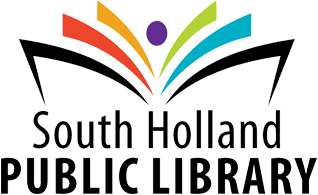 The Village of South Holland has 22,030 residents, is located in the Chicago Southland region and lives its motto, “Faith, Family, Future.” The Library has long been important to Village residents and to the region, celebrating 50 years of inspired existence in 2011. We offer responsive, personal service; comfortable seating with easy access to Wi-Fi and electrical outlets; study areas and meeting spaces that work well for individuals and group meetings; and programs that are second to none in innovation and learning value.

The Mission of the South Holland Public Library is to serve and promote the informational, educational, cultural, and recreational needs of all members of the South Holland community by providing access to a professional staff, a state of the art facility and quality materials, programs and services. It is also our mission to manage library resources wisely and ethically in support of our diverse community. The South Holland Public Library is committed to supporting a lifelong enjoyment of reading and learning.

On February 27, 1961, the Board of Trustees of the Village of South Holland passed a resolution establishing the Public Library and the Library Commission and designated property at 16175 South Park Avenue for library use. Read the original resolution.

Dr. James Hogg, Lillian Chapman, and Richard DeRobertis were the first directors of the Library Commission, and Marcia Broek was appointed as the first librarian. Thanks to the volunteer efforts of the South Holland Lions Club, the building interior was remodeled and the Library opened to the public in September 1961.

The Library has since undergone many remodeling and renovation projects, most notably with major renovations in 1991-92 and in 2002-03. Additional projects have been completed, which include the roof replacement in 2006, drainage tile replacement in 2007, creation of the Teen Room in 2015, and the installation of a new ADA-compliant elevator in 2018.